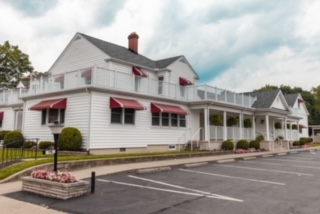 The oldest funeral business in Clark County, the Trostel, Chapman, Dunbar & Fraley Funeral Home, 507 W. Jefferson St., New Carlisle, has roots going back to the Civil War era. Around 1860, a gentleman by the name of Helvey (his first name is unknown) opened the first funeral parlor in the area. He was a kind and compassionate man, always treating each individual with the utmost care. During the Civil War, Mr. Helvey embalmed and prepared mortally wounded Union and Confederate soldiers alike; his feeling was that no matter which side a deceased soldier had been fighting on, he deserved to be treated with dignity and respect.

After the Civil War came to an end, Mr. Helvey brought on staff another gentleman from New Carlisle by the name of Funderburgh (first name unknown) who also had served as an undertaker during the war. Eventually, the two became partners, and the funeral parlor became known as the Helvey & Funderburgh Funeral Home.

Then, in 1888, the business was sold to two brothers, Lemuel and William Doom, who changed the name of the firm to the Doom Funeral Home. William also wanted to start a furniture business (it was common at that time to combine furniture-making with the funeral business), so the Doom brothers decided that they would purchase one building from which they could operate both businesses. Lemuel operated the funeral parlor, while William oversaw the furniture business. Their employees worked for both companies, and their teams of horses were used to pull the furniture delivery wagon as well as the funeral home’s buggies and hearses.

That same year, George Trostel and his family came to Ohio from Gettysburg, Pennsylvania, and decided to settle in New Carlisle. Mr. Trostel started up a funeral parlor, Trostel Funeral Home, as well as his own furniture business. The Doom brothers and the Trostel’s all got along well and worked hard to establish themselves in the community.

In 1895, wealthy New Carlisle businessman James Perrine built one of the most beautiful and lavishly detailed homes in the area. Located on Main St., next to the New Carlisle United Methodist Church, the home was truly magnificent, with ornately carved hardwoods of solid mahogany, oak, walnut, and cherry throughout the home, all of which was harvested from wooded areas in Clark County. Perrine spared no expense in elaborately decorating the home’s 15 large rooms. The home was a showplace, but for unknown reasons, Perrine did not reside in the home for very long. Unable to find any individual who could afford to buy it purely for residential use, he sold the home in the early 1900’s, and the Perrine residence became the Holwager House Hotel. When the Holwager House Hotel was put up for sale in 1928, Lemuel and William decided this was the perfect opportunity to move their funeral parlor to a location that would afford them more space. They purchased the magnificent structure, and turned it into the area’s most beautiful funeral parlor. Their furniture business continued operations in the original building.

News of Lemuel Doom purchasing this spectacular structure spread quickly, and according to an article in the Springfield News-Sun (May 17, 1970) “the Doom Funeral Home put New Carlisle on the map,” by being listed in “Ripley’s Believe It or Not” in 1928 - as a funeral home with the most unusual name.

By 1929, Trostel Funeral Home had outgrown its space, and rather than move to another location, George decided to renovate and add on to the existing structure. The resulting addition was spectacular, with every possible modern convenience.

By the late 1940’s, another generation of Doom’s and Trostel’s stepped in to assume operations of their family’s respective funeral businesses. By 1949, Garrett Trostel had taken over operations of his family’s funeral home, and his first order of business was to once again enlarge and redesign the funeral home. Garrett’s son, G. William (Bill) Trostel would soon join his father in the family’s funeral business.

Two years earlier, Lemuel Doom’s son, John, who was also the bandleader of the very popular “Johnny Doom Band” during the 1930’s and 1940’s took over his father’s funeral business. John continued operations of the Doom Funeral Home until his untimely death in 1959, at the age of 49. It was then that a young Ted Chapman and his wife Helen bought the Doom Funeral Home, and changed the name to Chapman Memorial Home. Ted and Helen operated their funeral home together, and at about the same time, Garrett Trostel passed his funeral home’s torch on to his son, Bill. Ted and Bill had been very good friends for a longtime, and being in the same business, would often help each other out. The two men pondered the idea of merging their two funeral homes into one – and decided that it would be a great idea. The merger was the perfect blending of two men who both valued hard work and dedication to funeral service.

On January 1, 1966, their partnership in the Trostel-Chapman Funeral Home began, at the funeral home’s current location, at 507 W. Jefferson St. in New Carlisle. In 1970, the original site of the Doom Funeral Home was demolished in order to build a new sanctuary for the New Carlisle United Methodist Church. In 1980, several years after Bill Trostel passed away, Ted Chapman merged his funeral home with his long-time friend Fred Raff, who owned Austin Richards & Raff Memorial Home in Springfield, and the two operated both funeral homes until they sold them in 1988 to Rick and Anne Dunbar and Bob Christmas. Christmas left the firm in 2004.

In the mid-2000’s, the New Carlisle funeral home underwent renovations that more than tripled the size of the home, making it more spacious and comfortable. The property is meticulously maintained.